I realized that I have been checking out some cool places lately. So I’ve made a new category for all of my posts documenting the fun places where we can “hang out” at together!

I have been wanting to visit Terrain at Styers for a long time now. It’s owned by Urban Outfitters, so you KNOW it’s going to be amazing…Finally, I had my opportunity to get myself out there, so last weekend, I took myself on a nice brunch date there 🙂

First, I strolled around the greenhouses and outdoor areas:

The mantle with the greenery was such a sweet idea to bring some character to a weathered shed. 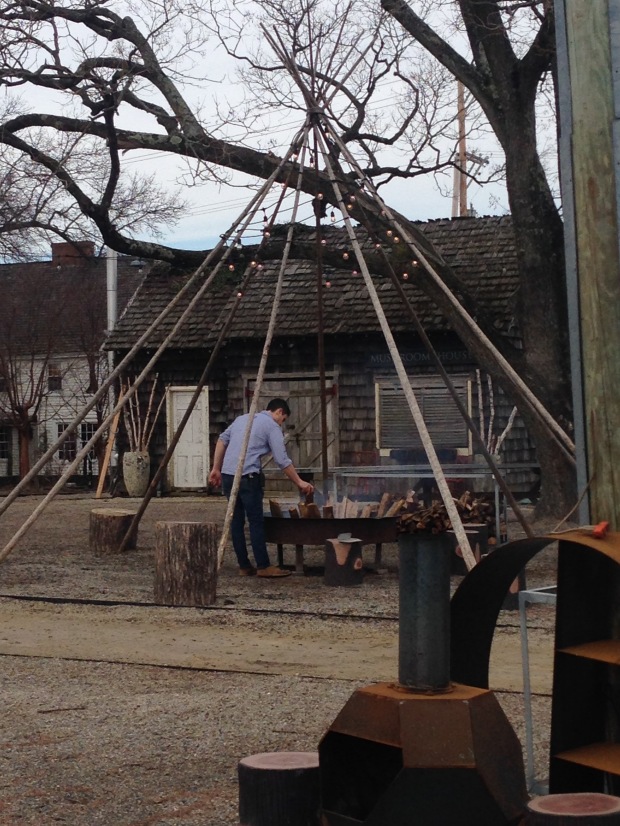 The smell of a wood burning fire was so welcoming on this warm winter day. It stayed in my hair for hours after I left! 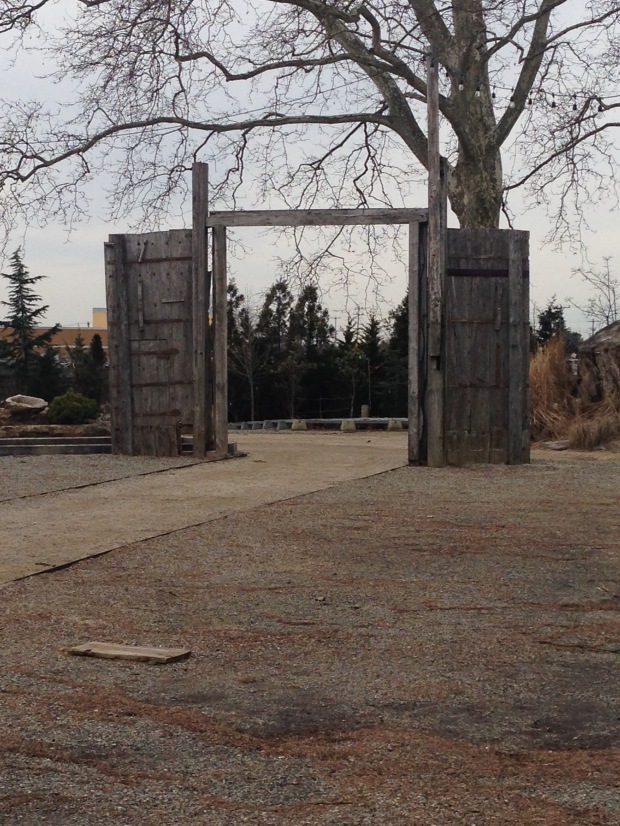 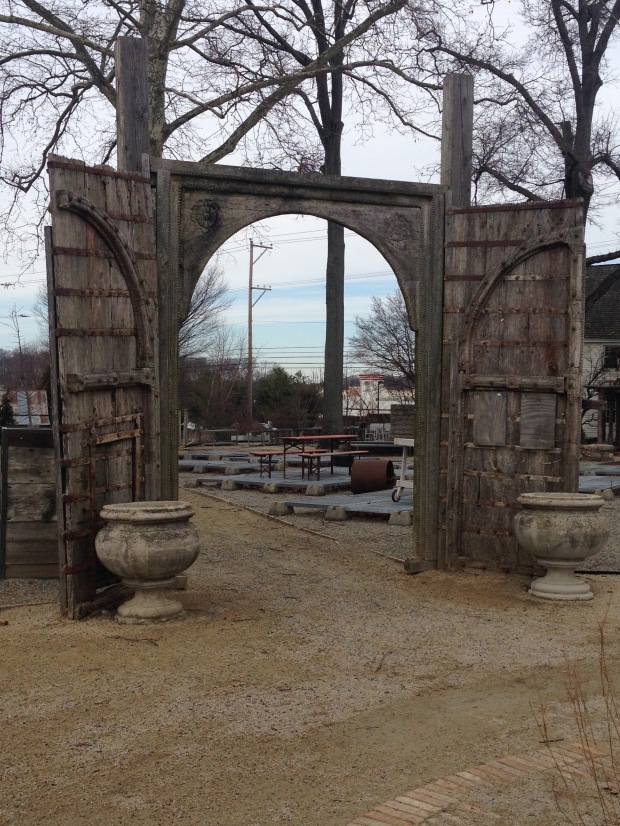 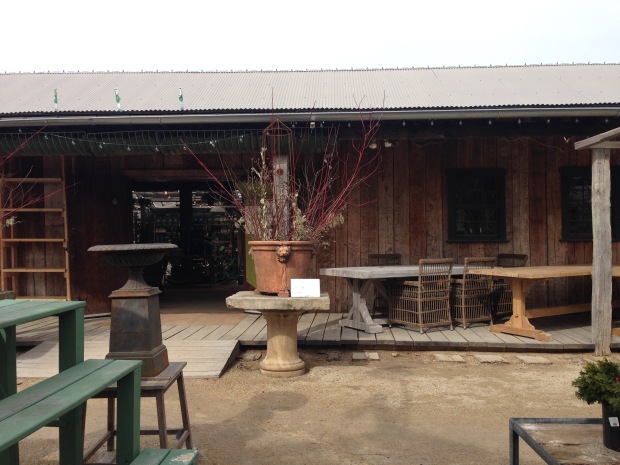 And then I checked out the little Mushroom House: 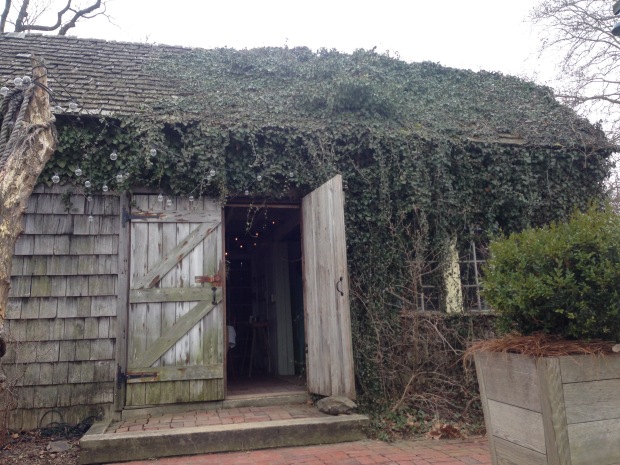 It was being set up for a private gathering later that day. A woman was setting up in there, so I could only snap a few clandestine shots before I snuck out of there 🙂

Then, it was off to the cafe!

Again, sly photography-but you can see the beverage bar area made of what looked to be wood boxes. S0 garden-y… 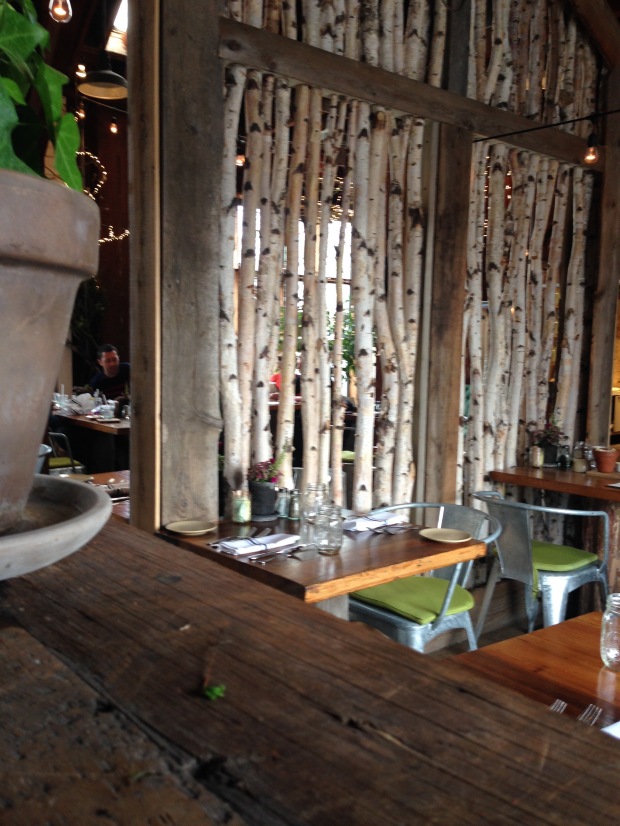 Even the way they used the white birch branches inside of a “house frame” was theme-y in a good way. It felt like a whimsical bird house!

Once I was at my table, I enjoyed the gnomey rustic-ness of the dining area. 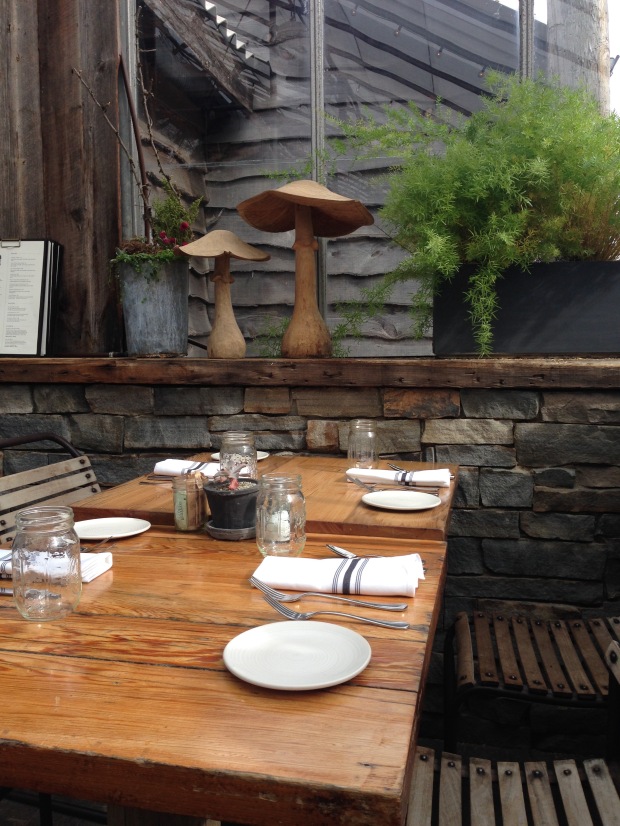 I was a little disappointed when I tried to order my meal. I asked them to substitute potato hash and bacon with apple fritters (obviously), and they got themselves into a kerfluffle just trying to figure out how they were going to do that. And when my meal came out, it was missing the hash browns and sausage, but came with bacon. Not too big of a deal, but the waitress said nicely, “Usually, we charge extra for custom orders, but since we’re not busy, we’ll make an exception”…When I read their menu, bacon, sausage, and apple fritters were all the same cost, so I’m not sure who it cost them more, but anyway…I ordered their Breakfast Board, which was 2 overlays eggs, a petite salad, 2 pieces of challah toast, bacon, and my apple fritters 🙂 I also got a cherry vanilla homemade soda. I splurged a little bit on my calories, so sue me… 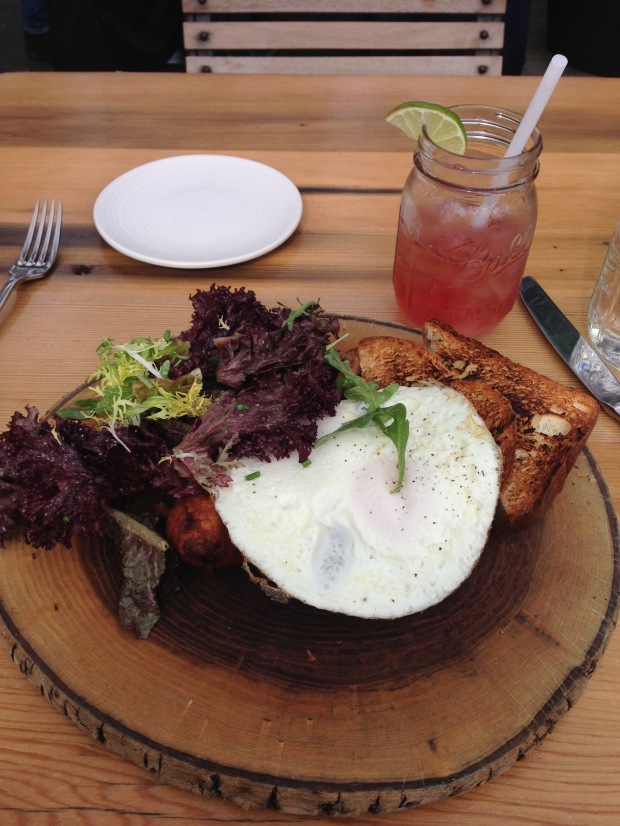 Loved the wood slice plate that it was served on, and the receipt came in this sweet vintage kite book. Overall, my waitress was nice, the food was good, and the atmosphere divine.

Next, I visited their shop. Which was stunning. In fact, I was so inspired, that I created a whole model apartment concept after this polished rustic look for work… 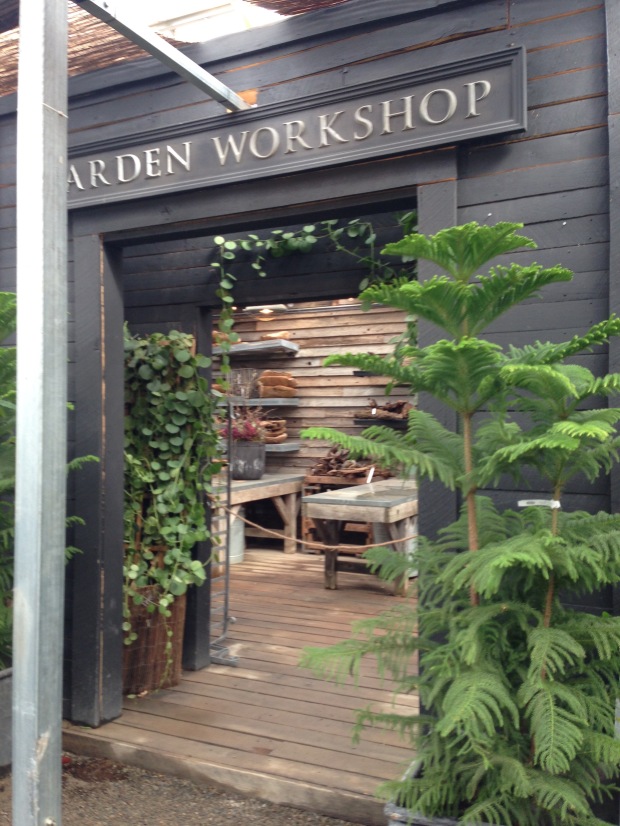 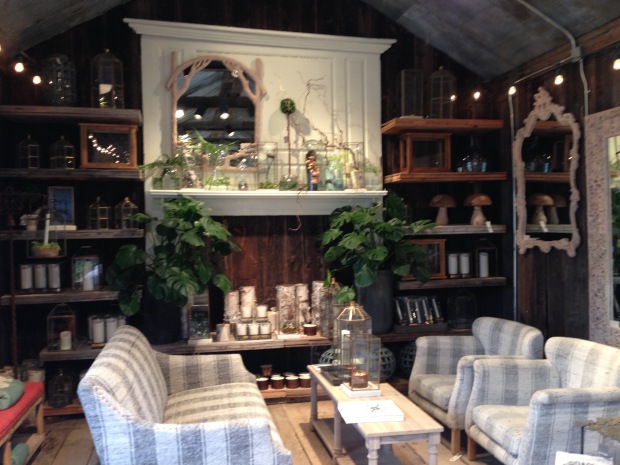 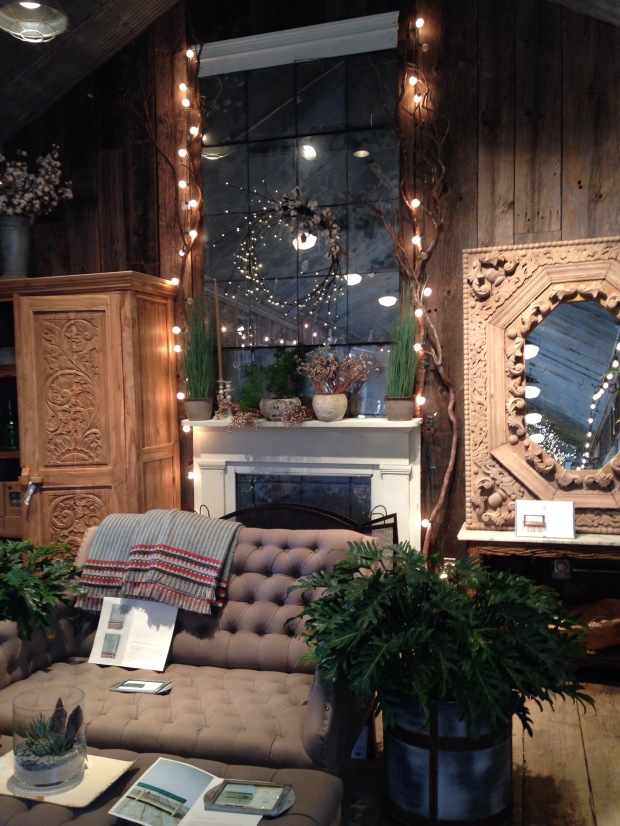 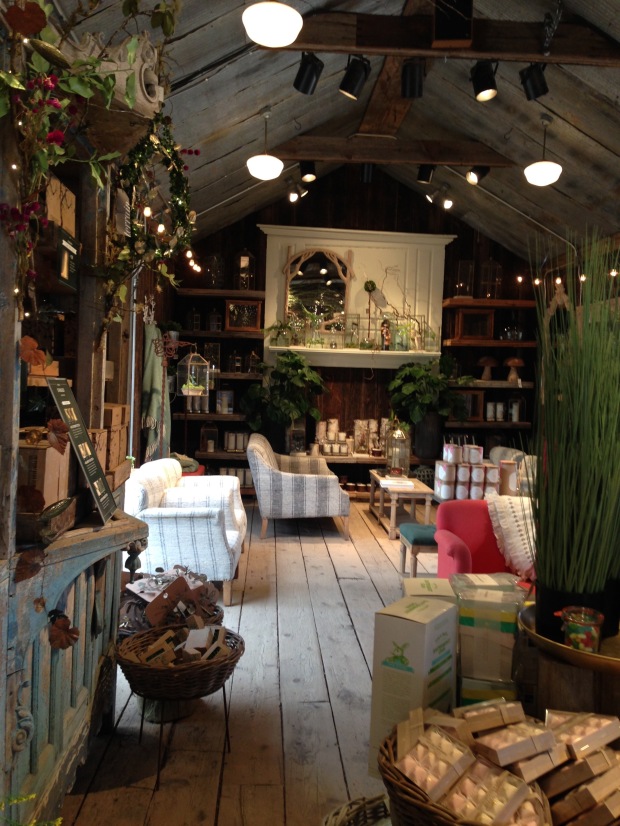 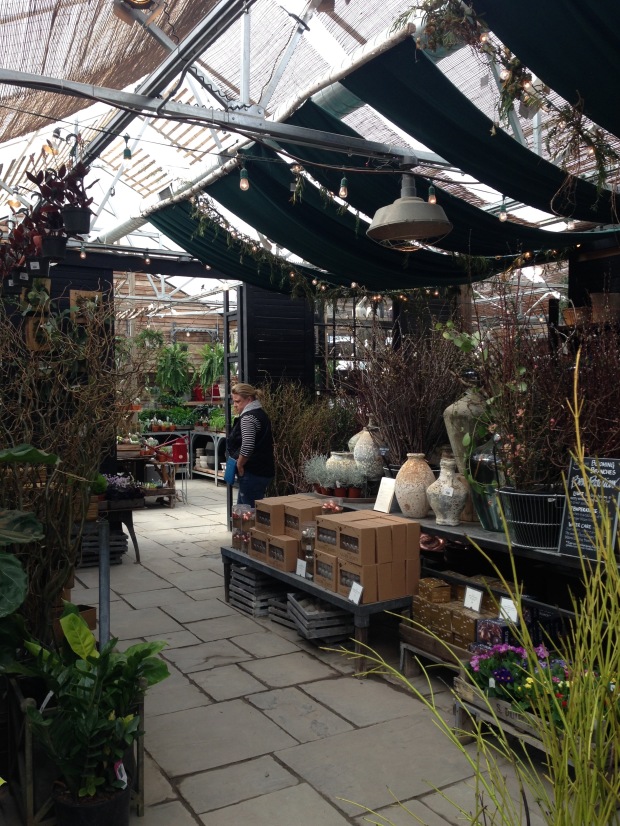 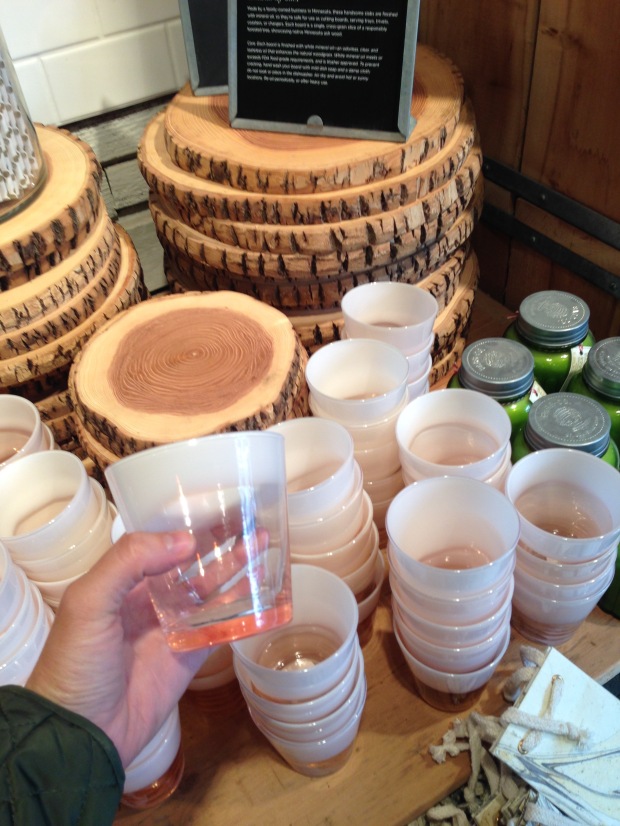 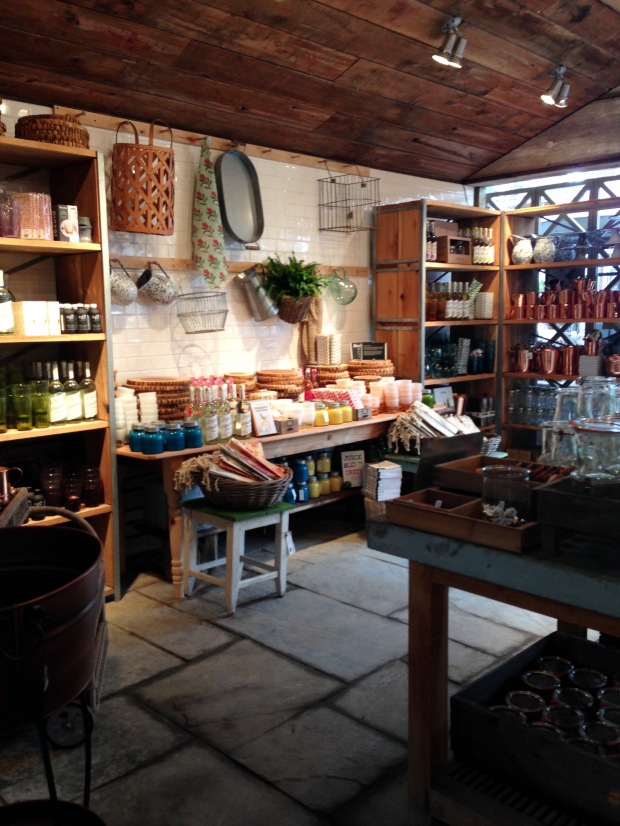 Finally, I crept around the wedding pavilion.

I did think that the ceremony spot looked a bit weathered, and I hoped for the spring brides’ sake, that they would repaint the structure…but right across the brick paved walkway was the reception area…

Luckily for me, they were setting up for a celebration, so I got to see it in all of its glory. 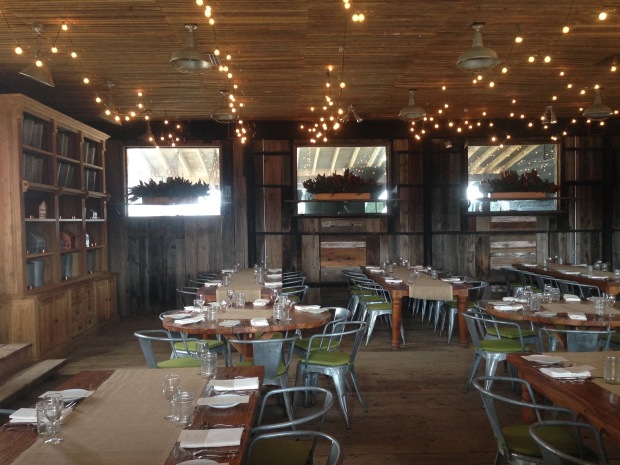 That is one lucky couple. It was gorg!

Overall, I thought it was beautiful! I have to say, I am REALLY looking forward to going back in the spring (which is mere weeks away!) when more flora is blooming. An updated post may follow…

2 thoughts on “Hanging Out At…Terrain at Styers”